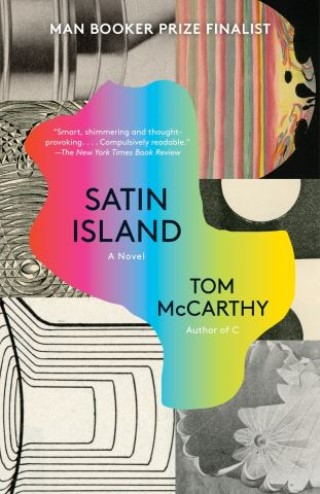 Short-listed for the Man Booker Prize

From the author of Remainder and C (short-listed for the Man Booker Prize), and a winner of the Windham-Campbell Literature Prize, comes Satin Island, an unnerving novel that promises to give us the first and last word on the world—modern, postmodern, whatever world you think you are living in.

U., a “corporate anthropologist,” is tasked with writing the Great Report, an all-encompassing ethnographic document that would sum up our era. Yet at every turn, he feels himself overwhelmed by the ubiquity of data, lost in buffer zones, wandering through crowds of apparitions, willing them to coalesce into symbols that can be translated into some kind of account that makes sense. As he begins to wonder if the Great Report might remain a shapeless, oozing plasma, his senses are startled awake by a dream of an apocalyptic cityscape.

In Satin Island, Tom McCarthy captures—as only he can—the way we experience our world, our efforts to find meaning (or just to stay awake) and discern the narratives we think of as our lives.

Tom McCarthy: TOM McCARTHY was born in 1969 and lives in London. He is known in the art world for the reports, manifestos, and media interventions he has made as general secretary of the International Necronautical Society (INS), a semi-fictitious avant-garde network. His previous books include Men in Space, C, Remainder, and Tintin and the Secret of Literature.