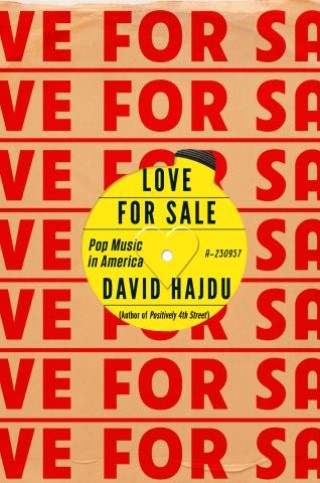 A personal, idiosyncratic history of popular music that also may well be definitive, from the revered music critic

From the age of song sheets in the late nineteenth-century to the contemporary era of digital streaming, pop music has been our most influential laboratory for social and aesthetic experimentation, changing the world three minutes at a time.

In Love for Sale, David Hajdu—one of the most respected critics and music historians of our time—draws on a lifetime of listening, playing, and writing about music to show how pop has done much more than peddle fantasies of love and sex to teenagers. From vaudeville singer Eva Tanguay, the “I Don’t Care Girl” who upended Victorian conceptions of feminine propriety to become one of the biggest stars of her day to the scandal of Blondie playing disco at CBGB, Hajdu presents an incisive and idiosyncratic history of a form that has repeatedly upset social and cultural expectations.

Exhaustively researched and rich with fresh insights, Love for Sale is unbound by the usual tropes of pop music history. Hajdu, for instance, gives a star turn to Bessie Smith and the “blues queens” of the 1920s, who brought wildly transgressive sexuality to American audience decades before rock and roll. And there is Jimmie Rodgers, a former blackface minstrel performer, who created country music from the songs of rural white and blacks . . . entwined with the sound of the Swiss yodel. And then there are today’s practitioners of Electronic Dance Music, who Hajdu celebrates for carrying the pop revolution to heretofore unimaginable frontiers. At every turn, Hajdu surprises and challenges readers to think about our most familiar art in unexpected ways.
Masterly and impassioned, authoritative and at times deeply personal, Love for Sale is a book of critical history informed by its writer's own unique history as a besotted fan and lifelong student of pop.

David Hajdu: David Hajdu is the music critic for The New Republic and a professor at the Columbia University Graduate School of Journalism. He is the author of three books of narrative nonfiction and and one collection of essays:Lush Life: A Biography of Billy Strayhorn (1996), Positively 4th Street: The Lives and Times of Joan Baez, Bob Dylan, Mimi Baez Fariña, and Richard Fariña (2001), The Ten-Cent Plague: The Great Comic Book Scare and How It Changed America (2008), andHeroes and Villains: Essays on Music, Movies, Comics, and Culture (2009). He lives in Manhattan.