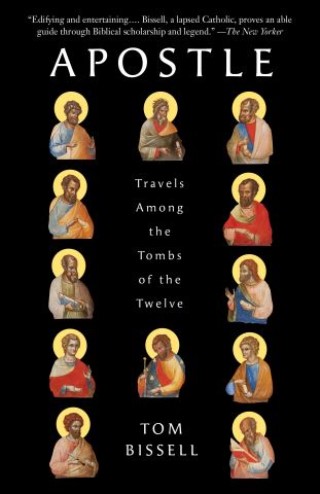 Travels Among the Tombs of the Twelve

A profound and moving journey into the heart of Christianity that explores the mysterious and often paradoxical lives and legacies of the Twelve Apostles—a book both for those of the faith and for others who seek to understand Christianity from the outside in.

“Expertly researched and fascinating… Bissell is a wonderfully sure guide to these mysterious men.… This is a serious book about the origins of Christianity that is also very funny. How often can you say that?” —The Independent

Peter, Matthew, Thomas, John: Who were these men? What was their relationship to Jesus? Tom Bissell provides rich and surprising answers to these ancient, elusive questions. He examines not just who these men were (and weren’t), but also how their identities have taken shape over the course of two millennia.

Ultimately, Bissell finds that the story of the apostles is the story of early Christianity: its competing versions of Jesus’s ministry, its countless schisms, and its ultimate evolution from an obscure Jewish sect to the global faith we know today in all its forms and permutations. In his quest to understand the underpinnings of the world’s largest religion, Bissell embarks on a years-long pilgrimage to the supposed tombs of the Twelve Apostles. He travels from Jerusalem and Rome to Turkey, Greece, Spain, France, India, and Kyrgyzstan, vividly capturing the rich diversity of Christianity’s worldwide reach. Along the way, he engages with a host of characters—priests, paupers, a Vatican archaeologist, a Palestinian taxi driver, a Russian monk—posing sharp questions that range from the religious to the philosophical to the political.

Written with warmth, empathy, and rare acumen, Apostle is a brilliant synthesis of travel writing, biblical history, and a deep, lifelong relationship with Christianity. The result is an unusual, erudite, and at times hilarious book—a religious, intellectual, and personal adventure fit for believers, scholars, and wanderers alike.

Tom Bissell: TOM BISSELL is the author of eight previous books, most recently The Disaster Artist, and has been awarded the Rome Prize and a Guggenheim Fellowship. He writes frequently for Harper’s Magazine and The New Yorker.