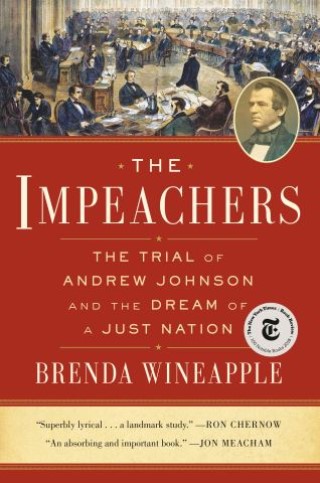 “This absorbing and important book recounts the titanic struggle over the implications of the Civil War amid the impeachment of a defiant and temperamentally erratic American president.”—Jon Meacham, Pulitzer Prize–winning author of The Soul of America

When Abraham Lincoln was assassinated and Vice-President Andrew Johnson became “the Accidental President,” it was a dangerous time in America. Congress was divided over how the Union should be reunited: when and how the secessionist South should regain full status, whether former Confederates should be punished, and when and whether black men should be given the vote. Devastated by war and resorting to violence, many white Southerners hoped to restore a pre–Civil War society, if without slavery, and the pugnacious Andrew Johnson seemed to share their goals. With the unchecked power of executive orders, Johnson ignored Congress, pardoned rebel leaders, promoted white supremacy, opposed civil rights, and called Reconstruction unnecessary. It fell to Congress to stop the American president who acted like a king.

With profound insights and making use of extensive research, Brenda Wineapple dramatically evokes this pivotal period in American history, when the country was rocked by the first-ever impeachment of a sitting American president. And she brings to vivid life the extraordinary characters who brought that impeachment forward: the willful Johnson and his retinue of advocates—including complicated men like Secretary of State William Seward—as well as the equally complicated visionaries committed to justice and equality for all, like Thaddeus Stevens, Charles Sumner, Frederick Douglass, and Ulysses S. Grant. Theirs was a last-ditch, patriotic, and Constitutional effort to render the goals of the Civil War into reality and to make the Union free, fair, and whole.

Praise for The Impeachers

“In this superbly lyrical work, Brenda Wineapple has plugged a glaring hole in our historical memory through her vivid and sweeping portrayal of President Andrew Johnson’s 1868 impeachment. She serves up not simply food for thought but a veritable feast of observations on that most trying decision for a democracy: whether to oust a sitting president. Teeming with fiery passions and unforgettable characters, The Impeachers will be devoured by contemporary readers seeking enlightenment on this issue. . . . A landmark study.”—Ron Chernow, Pulitzer Prize–winning author of Grant

Brenda Wineapple: Brenda Wineapple is the author of several books including Ecstatic Nation: Confidence, Crisis, and Compromise, 1848-1877, named a best book of the year by The New York Times, among other publications; White Heat: The Friendship of Emily Dickinson and Thomas Wentworth Higginson, a finalist for the National Book Critics Circle Award; Hawthorne: A Life, winner of the Ambassador Award for Best Biography of the Year; and Sister Brother: Gertrude and Leo Stein. Her numerous other honors include a Literature Award from the American Academy of Arts and Letters, a Pushcart Prize, a Guggenheim Fellowship, an American Council of Learned Societies Fellowship, two National Endowment Fellowships in the Humanities, and, most recently, a National Endowment Public Scholars Award. She is an elected member of the American Academy of Arts and Sciences and of the Society of American Historians and regularly contributes to major publications such as The New York Times Book Review, The New York Review of Books, The Wall Street Journal, and The Nation.