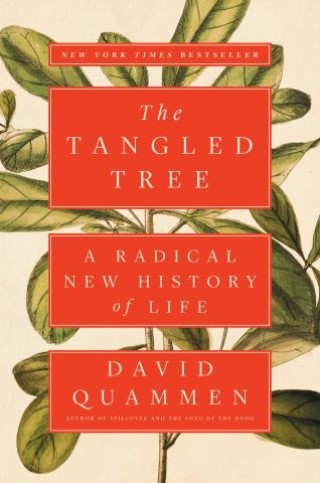 A Radical New History of Life

In this New York Times bestseller and longlist nominee for the National Book Award, “our greatest living chronicler of the natural world” (The New York Times), David Quammen explains how recent discoveries in molecular biology affect our understanding of evolution and life’s history.

In the mid-1970s, scientists began using DNA sequences to reexamine the history of all life. Perhaps the most startling discovery to come out of this new field—the study of life’s diversity and relatedness at the molecular level—is horizontal gene transfer (HGT), or the movement of genes across species lines. It turns out that HGT has been widespread and important; we now know that roughly eight percent of the human genome arrived sideways by viral infection—a type of HGT.

In The Tangled Tree, “the grandest tale in biology….David Quammen presents the science—and the scientists involved—with patience, candor, and flair” (Nature). We learn about the major players, such as Carl Woese, the most important little-known biologist of the twentieth century; Lynn Margulis, the notorious maverick whose wild ideas about “mosaic” creatures proved to be true; and Tsutomu Wantanabe, who discovered that the scourge of antibiotic-resistant bacteria is a direct result of horizontal gene transfer, bringing the deep study of genome histories to bear on a global crisis in public health.

“David Quammen proves to be an immensely well-informed guide to a complex story” (The Wall Street Journal). In The Tangled Tree, he explains how molecular studies of evolution have brought startling recognitions about the tangled tree of life—including where we humans fit upon it. Thanks to new technologies, we now have the ability to alter even our genetic composition—through sideways insertions, as nature has long been doing. “The Tangled Tree is a source of wonder….Quammen has written a deep and daring intellectual adventure” (The Boston Globe).

David Quammen: David Quammen’s fifteen books include The Tangled Tree, The Song of the Dodo, The Reluctant Mr. Darwin, and Spillover, a finalist for the National Book Critics Circle award. He has written for Harper’s, The Atlantic, Rolling Stone, The New York Times Book Review, Outside, and Powder, among other magazines, and is a contributing writer for National Geographic. He wrote the entire text of the May 2016 issue of National Geographic on the Greater Yellowstone ecosystem—the first time in the history of the magazine that an issue was single-authored. Quammen shares a home in Bozeman, Montana, with his wife, Betsy Gaines Quammen, an environmental historian, along with two Russian wolfhounds and a cross-eyed cat. Visit him at DavidQuammen.com.