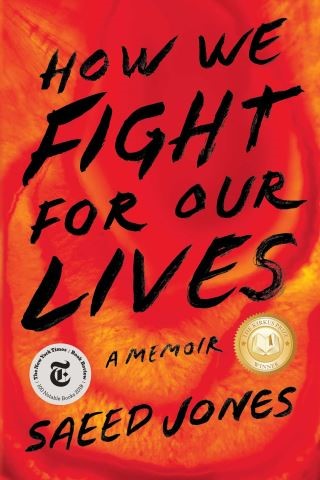 How We Fight for Our Lives

WINNER OF THE 2019 KIRKUS PRIZE IN NONFICTION

One of the best books of the year as selected by The Washington Post; NPR; Time; The New Yorker; O, The Oprah Magazine; Harper’s Bazaar; Elle; Kirkus Reviews; Publishers Weekly; BuzzFeed; Goodreads; School Library Journal; and many more.

“Jones’s voice and sensibility are so distinct that he turns one of the oldest of literary genres inside out and upside down.” —NPR’S Fresh Air

“People don’t just happen,” writes Saeed Jones. “We sacrifice former versions of ourselves. We sacrifice the people who dared to raise us. The ‘I’ it seems doesn’t exist until we are able to say, ‘I am no longer yours.’”

Haunted and haunting, How We Fight for Our Lives is a stunning coming-of-age memoir. Jones tells the story of a young, black, gay man from the South as he fights to carve out a place for himself, within his family, within his country, within his own hopes, desires, and fears. Through a series of vignettes that chart a course across the American landscape, Jones draws readers into his boyhood and adolescence—into tumultuous relationships with his family, into passing flings with lovers, friends, and strangers. Each piece builds into a larger examination of race and queerness, power and vulnerability, love and grief: a portrait of what we all do for one another—and to one another—as we fight to become ourselves.

An award-winning poet, Jones has developed a style that’s as beautiful as it is powerful—a voice that’s by turns a river, a blues, and a nightscape set ablaze. How We Fight for Our Lives is a one-of-a-kind memoir and a book that cements Saeed Jones as an essential writer for our time.

Saeed Jones: Saeed Jones is the author of Prelude to Bruise, winner of the 2015 PEN/Joyce Osterweil Award for Poetry and the 2015 Stonewall Book Award/Barbara Gittings Literature Award. The poetry collection was also a finalist for the 2015 National Book Critics Circle Award, as well as awards from Lambda Literary and the Publishing Triangle in 2015. Jones was born in Memphis, Tennessee, and grew up in Lewisville, Texas. He earned a BA at Western Kentucky University and an MFA at Rutgers University-Newark. He lives in Columbus, Ohio and tweets @TheFerocity.