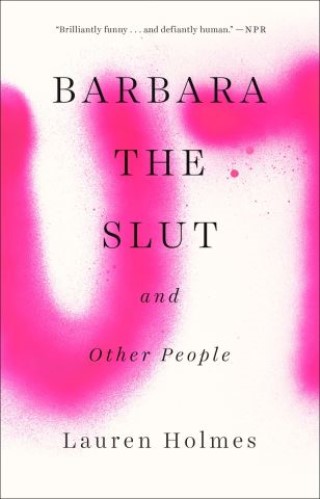 Barbara the Slut and Other People

A fresh, honest, and darkly funny debut collection about family, friends, and lovers, and the flaws that make us most human.

Fearless, candid, and incredibly funny, Lauren Holmes is a newcomer who writes like a master. She tackles eros and intimacy with a deceptively light touch, a keen awareness of how their nervous systems tangle and sometimes short-circuit, and a genius for revealing our most vulnerable, spirited selves.

In “Desert Hearts,” a woman takes a job selling sex toys in San Francisco rather than embark on the law career she pursued only for the sake of her father. In “Pearl and the Swiss Guy Fall in Love,” a woman realizes she much prefers the company of her pit bull—and herself—to the neurotic foreign fling who won’t decamp from her apartment. In “How Am I Supposed to Talk to You?” a daughter hauls a suitcase of lingerie to Mexico for her flighty, estranged mother to resell there, wondering whether her personal mission—to come out—is worth the same effort. And in “Barbara the Slut,” a young woman with an autistic brother, a Princeton acceptance letter, and a love of sex navigates her high school’s toxic, slut-shaming culture with open eyes.

With heart, sass, and pitch-perfect characters, Barbara the Slut is a head-turning debut from a writer with a limitless career before her.

Lauren Holmes: Lauren Holmes grew up in upstate New York. She received a BA from Wellesley College and an MFA from Hunter College, where she was a Hertog Fellow and a teaching fellow. Her work has appeared in Granta, where she was a 2014 New Voice, and in Guernica. Holmes lives in New York’s Hudson Valley.