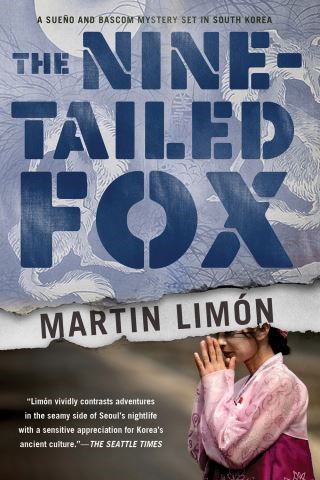 Martin Limón’s series set in 1970s South Korea, an era of heightened Korean sociopolitical tension, pits Army CID agents Sueño and Bascom against a mysterious woman who may be the leader of a gang—or a thousand-year-old creature.

Three American GIs have gone missing in different South Korean cities. Sergeants George Sueño and Ernie Bascom, agents for the Army CID, link the disappearances to a woman locally rumored to be a gumiho, a legendary thousand-year-old nine-tailed fox disguised as a woman. George suspects that the woman is no mythical creature, but a criminal who’s good at covering her tracks.

Meanwhile, George and Ernie are caught in a power struggle between two high-ranking women in the 8th Army. Scrambling to appease his boss and stay one step ahead of a psychotic mastermind, George realizes he will have to risk his life to discover the whereabouts of his fellow countrymen.

Martin Limón: Martin Limón retired from military service after twenty years in the US Army, including ten years in Korea. He is the author of eleven previous novels in the Sergeant George Sueño series: Jade Lady Burning, Slicky Boys, Buddha’s Money, The Door to Bitterness, The Wandering Ghost, GI Bones, Mr. Kill, The Joy Brigade, The Iron Sickle, The Ville Rat, and Ping-Pong Heart, as well as the short story collection Nightmare Range. He lives near Seattle.